What Facebook’s Bet on AR Means for Brands

At last year’s F8 conference, Mark Zuckerberg introduced AR to Facebook with the implementation of the Camera Effects Platform and AR Studio. Since then, this enhancement to reality has notably begun to shift marketing strategies for brands.

“We’re aspiring to have the easiest to use creation tools,” says Ficus Kirkpatrick, Engineering Director in charge of Facebook’s AR projects. “You don’t have to know code to use this. Artists and creators who just want to make art can play with it too.”

Open to all developers and creators, this richer, more intuitive interface focuses on “tighter, simpler, shorter experiences.” Says Kirkpatrick, “We need a lot of ideas for AR to succeed… Having more types of situations for more people to have other experiences is a big first step in.”

At this year’s F8 conference, Facebook announced that it was bringing AR Camera Effects Platform to Messenger with a closed beta. The first brands granted access were Nike, Asus, Kia, and Sephora. These brands have since utilized Facebook Messenger to create immersive experiences for customers that deliver value to both the user and the brand.

As an example, consider Nike’s successful sneaker campaign. Using an emoji code, consumers unlock a digital experience with a specialized shoe, letting them confidently purchase the product. It’s the closest way to experience a product without physically interacting with it—and the closest consumers can get to a brand’s physical world while remaining in the digital. 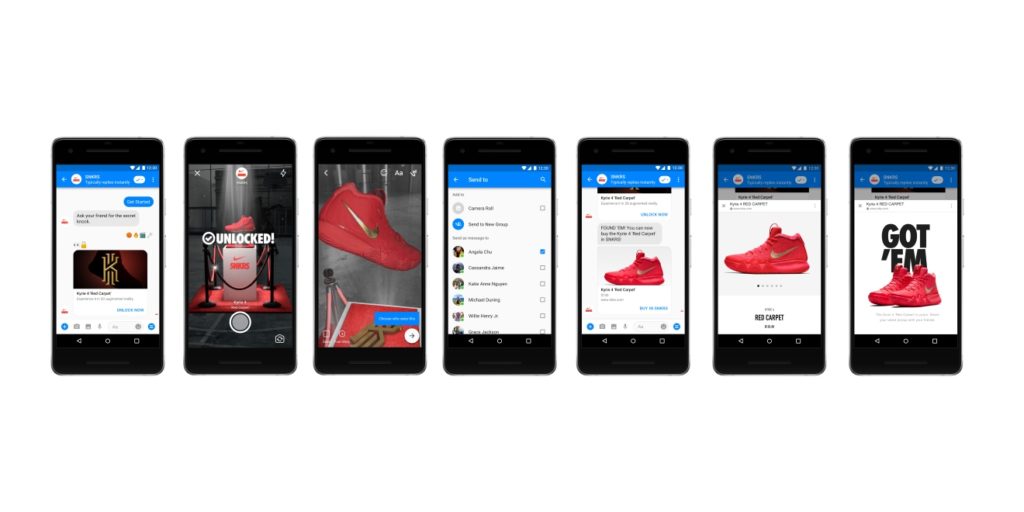 “Blending AR effects and messaging solves a real problem for people shopping online. There are so many situations where we need to visualize a product before we feel comfortable buying it. We often seek input from our friends and family before making a purchase. This feature—launching in closed beta—leverages the nature of messaging to help people get valuable, instant feedback about purchases, customizations, and more, without ever needing to set foot in a store.”

Bringing AR into the Real World

Facebook’s investment in augmented reality has expanded well beyond face masks and selfie filters. Earlier this year, Facebook launched a Target Tracker feature, which allows publishers, developers, and brands the ability to create augmented content that’s tied to images, logos, and signs in the real world. For example, a movie poster could act as a “portal” when the Facebook Camera App is pointed at it, allowing consumers to engage with movies in a new way.

Across Instagram, Messenger, and its News Feed, Facebook is building the world’s largest social augmented reality ecosystem—making the technology part of our everyday lives.

AR is our new reality.