The Brands That Won Social Media During Super Bowl LV

The Super Bowl is basically Christmas for advertisers. While the teams are competing for the Lombardi Trophy, big brands compete for everyone’s attention with iconic TV ad spots. In recent years, though, brands are increasingly incorporating social media marketing efforts into their Super Bowl advertising. Let’s take a look at a few of the most interesting ones from this year’s big game.

Indeed.com Bets on a TikTok Singer

Christian Shelton, a 19-year-old college student and TikToker, first posted his rendition of “Rise Up” by Andra Day in June to show support for the nationwide protests against racism and police brutality. Since then, he’s sung covers of many famous songs, including works by Beyonce and Corinne Bailey Rae, and his following on the short-form video app has grown to more than 700,000 people.

With joblessness a major problem plaguing the country, Indeed wanted to showcase an up-and-coming artist for its ad spot. After hearing Shelton’s version of the inspirational song, the job platform loved not only his performance but his positive attitude as well. Shelton recorded the cover of the song heard in the ad specifically for Indeed.

The CEO of Swedish oat milk brand Oatly performed a bizarre song he wrote himself called“Wow, No Cow”while in the middle of a field for the brand’s Super Bowl spot. Originally shown in 2014, the commercial was quickly banned in the company’s home country.

Seven years later, it made its U.S. debut during the Super Bowl for somewhere north of $5 million. A big bet for the alternative milk company, but it sure got people talking on social media. Some claimed it was the best Super Bowl ad they’ve seen (questionable) while others tweeted to say they promised to swear off of the brand for good after hearing these lyrics: “It’s like milk. Like made for humans. Wow.”

But the brand still capitalized. Shortly after their ad aired, Oatly released a t-shirt with “I totally hated that Oatly commercial” that sold out in less than five minutes, so it’s safe to say we’ll be seeing the brand for months to come.

Following a big week in the headlines, Reddit bought a five-second ad spot in major markets during the big game to celebrate what can happen when people come together. Only available on CBS owned and operated channels and affiliates in nine of the top 10 markets, the ad was a photo of a Reddit post. With only five seconds to read it, it was designed to make people pause their TVs.

And it appears to have worked. Now posted on Twitter, the ad has more than 300,000 views. 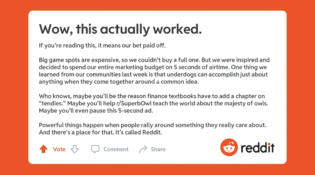 Not only did Cheetos tap celebrity power couple Mila Kunis and Ashton Kutcher alongside rapper Shaggy and his infamous song “It Wasn’t Me” for their Super Bowl ad, but they embedded Snapchat codes, too—meaning viewers could use their Snapchat app to unlock free snacks.

How did they do it? Each of the commercial’s frames included a stealthy Snapchat code, so pausing the TV wasn’t required to participate. Once scanned, Snapchat will send users a virtual bag of Cheetos new Crunch Pop Mix that can be redeemed for the real thing. Talk about bringing the virtual into reality.

While Budweiser opted out of an ad this year, Bud Light Seltzer Lemonade ran an ad about how 2020 was a ‘lemon’ of a year. But, if you paid attention during the game and are one of 7.4 million others who follow @dudewithasign on Instagram, then you saw both his post that was “obviously sponsored” and his IRL sign that read “When life gives you lemons, make lemonade” while adorning a branded mask and Bud Light Seltzer Lemonade in hand.

While this doesn’t quite bring free drinks to the masses, it does show how multi-channel advertising has evolved to use social media and sponsored content.

So, what does all of this mean?

Much like the state of the country, the advertising world was split on how to handle the pandemic in Super Bowl advertising. Some leaned in, others avoided, and some were just… weird.

But, it seems that the brands that pivoted, embraced social media and emerging technology, and acknowledged the overall weirdness of 2020 and the start of 2021 won the recognition of Super Bowl viewers. Add to that the smart use of ads that can live beyond their 30-second time slot on Sunday night and you’ve got a winning strategy.